Bring your Hardstyle productions to the next level. Boost your creativity.
Get the ultimate headstart with Lussive Audio’s “Hardstyle Producer Complete Volume 1”

Are you just starting out as a producer? Or are you a pro looking for new inspiration and fresh sounds?
This pack holds 90% original samples and presets, not available in other sounds packs.

All presets are engineered for instant usage in a Hardstyle production.  Not focused on quantity, but on quality.
Pitch Bend sizes, EQing, Compression, they all follow the rules of Hardstyle.
Developed and precisely crafted by A-lusion.

This product includes the innovate Kick Configurator.
A Kontakt 5.6+ Instrument developed for configuring your own Hardstyle Kickdrum. The full Kontakt version is needed. The free Kontakt Player will enforce a demo time-out.
DEUTSCH: Sie benötigen die Vollversion von Native Instruments Kontakt, nicht die Kontakt Player
Coded, created and powered by A-lusion.
The instrument is in fact a library based on pre-defined samples. You can replace the samples with your own sample if you have those, by replacing the audio files in the filter. A total of 20 attack sounds, 22 tail sounds and 12 raw attack sounds are included in the purchase.

If you don’t have Kontakt or don’t need the Hardstyle Kick Configurator, you can buy the producer pack without it here.

All sounds in the introduction video below are included in the download pack. 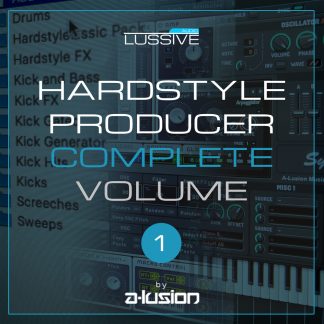